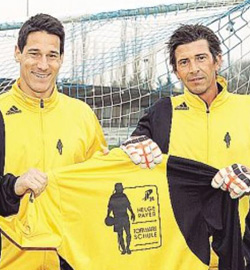 To support England from an English point of view is very frustrating.
This time could be different I hope.  England has had some good players in the past at club level, but the problem is handling the pressure at international level, especially goalkeepers for England.

In the past England’s previous managers have had problems with players coming from clubs like Liverpool, Manchester United and Chelsea.

In recent years when you have put the England players together, there’s too much rivalry between the players to all come together and play as one team. With Roy Hodgson it’s different. I understand what he does now with England’s players. When England’s players stay in a hotel before games, he mixes the Liverpool, Manchester United and Chelsea players together and does not allow players from the same team to room with each other before an England game, which I think is helpful for the team spirit.

I can’t say yes or no. They have the best chance for many years this time with the young and also the older players, which is a good mix any football team needs at any level to have young players and more experienced ones.
In the past England has always played with a lot of pressure from the newspapers and also played with a lot of fear. With the young players this time hopefully they can go out and play with no fear and express themselves, which England in the past have had problems by picking too older players.

If you look at Joe Hart from a goalkeeper’s point of view, he has most things coaches look for, his presence and his handling and kicking is superb.
But there are two things he needs to improve: decision-making – when to come out of your area or to stay on your line and consistency. Any defender will tell you it’s better to have a goalkeeper behind them who will play on an average level week in week out rather than be man of the match one week and then have a nightmare the next week, which I think Joe Hart at the moment is this kind of goalkeeper.

If you ask me who the best goalkeeper in the world is apart from me, I would have to say
Gianluigi Buffon. He is the best goalkeeper at club level and international level. He is the most consistent goalkeeper. The confidence he gives his defenders and how he commands his area is outstanding. When people think a goalkeeper is just about stopping the ball from going in the net, that’s far from true.